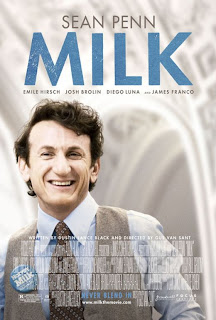 Cinematically, it's an elegant blend of the more traditional narrative structures of Van Sant's confidently commercial films (Good Will Hunting, Finding Forrester) leavened with just a dash of the avant-garde approach displayed in more recent works such as Elephant and Paranoid Park, and richly rounded out with the most judicious, insightful use of archival footage I think I've ever seen. Emotionally, it's a rich, warm, tragic and inspiring film that will inspire audiences as well as reduce them to tears.

Milk, a New Yorker who relocated to San Francisco in the early 70s, became - in November 1977 - the first openly gay man elected to public office in the USA. Instrumental in defeating an amendment that would have seen gay and lesbian teachers sacked from their jobs in California, Milk was an inspiration to thousands: a proudly outspoken homosexual who, by example, showed that bigotry and self-hate didn't have to dictate how you lived your life.

On November 27, 1978, Milk and San Francisco Mayor George Moscone were gunned down in City Hall by an embittered colleague, former policeman Dan White.

Milk opens with archival black and white footage from the 1950s and 1960s of police raids on gay bars: a grim reminder of the world that gay men of Milk's generation grew up in. When we meet Milk himself (Sean Penn), he is sitting at his kitchen table making a tape-recording to be played in the event of his death. It's this narrative device - based on an actual recording Milk made due to the number of death threats he received only weeks before he was killed - which frames the film. We return to this scene intermittently, with Penn as Milk providing a context or an rationale for certain sequences, but for most of its running time the film unfolds seamlessly, without need for narrative interjection. 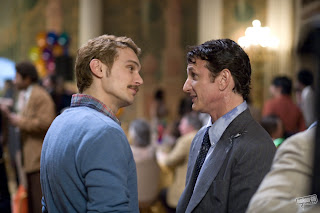 to detail (the look and style of the 70s is deftly re-created, but never feels forced or laid on with a trowel) bring the story to a beautifully realised, three dimensional life. And unlike standard biopics, which are often so intent on covering key events in their subject's life that they lack cohesion or flow, Milk binds its various aspects - political drama, romance, social justice, character study - into a seamless and fluid whole.

The addition of archival footage, as previously mentioned, not only adds to the film's air of historical vermisilitude, but helps advance the story in a classic example of the filmmaker's mantra, 'show, don't tell'. We see the changing nature of Castro Street as Milk and his ilk transform the district from decaying working class neighbourhood to burgeoning gay ghetto; we witness firsthand the emerging gay subculture of the 1970s which Milk was mobilising as a cultural and political force; and - in a sequence which still shocks - we see a shaken City Superviser Dianne Feinstein announce the assassinations of Mayor Moscone and Milk to a stunned crowd of reporters.

Much of the credit for the success of Milk must go to Black, whose screenplay is a masterpiece of insight and structure; and Van Sant, obviously, is the steady but unobtrusive hand on the tiller that keeps the film on an even course, never veering into melodrama or didacticism. But the core of the film is Sean Penn's performance as Harvey Milk. He utterly immerses himself in the role, displaying Milk's tenderness, versaility and gentle, impish charm, as well as the man's steely determination, ego and a boundless energy that burns up the screen. He is magnificent, and I'll be very suprised if Penn doesn't get at least an Oscar nomination for this role.

James Franco as Harvey's sweet young lover Scott Smith is also superb, both in the early, passionate stages of the men's relationship, as well as in later scenes where his eyes betray Smith's bewildered but painfully enduring love as the couple are driven apart by the demands of Milk's political career.

Emile Hirsch as street kid turned activist Cleve Jones is also excellent, as are the majority of the supporting cast, with the qualified exception of Diego Luna as Milk's unstable, tempremental lover Jack Lira. Lira lacks the definition of the film's other characters (possibly - and this is only conjecture on my behalf - because he was unpopular with Milk's inner circle of friends and colleagues, from whose collective recollections Dustin Lance Black gathered the details which form his screenplay over a long series of interviews) although Luna does his best with the material he has to work with. 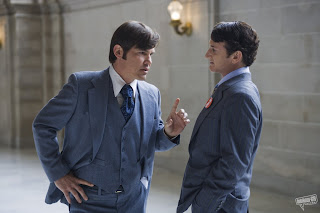 The most surprising character in this rich drama, however, is the man who would become Milk's killer: Dan White (James Brolin, pictured at left with Sean Penn).

White, who gunned down Mayor Moscone and Harvey Milk at point blank range on November 27, 1978, ultimately served only five years for the two murders he committed. But while it would have been easy for Black and Van Sant to portray White as a remorseless and violent homophobe, they are instead at pains to show us a complex, conflicted man. At one point in the film, Harvey wonders aloud whether Dan might be "one of us", and shortly thereafter, in a memorably vivid and subtext rich scene, Brolin plays out his character's conflicted nature perfectly, and with admirable restraint, as a drunken Dan White launches into a choked, inarticulate conversation with Harvey at Milk's birthday party.

Ultimately, Milk is a film about one man's passion for equality, and how his ideas inspired others even as he himself was gunned down. It's a remarkable cinematic achievement; a vivid tapestry of emotions and ideas and performances woven together into a rich, restrained whole. Van Sant directs with quiet confidence, knowing that he needs no flashy tricks when working with a script, cast and crew of such quality. Without doubt, Milk is the best film I have seen this year.

a review two and a half months early? that's just showing off

I saw the film last Thursday, and wanted to get my impressions down while the memories were still strong...

Van Sant is one of my favourite US film-makers (his previous film, Paranoid Park is the only film I've seen three times on the big screen during its theatrical release, and is one of my favourites of this year). So needless to say, I'd be seeing Milk regardless. But it's good to hear good advance buzz.